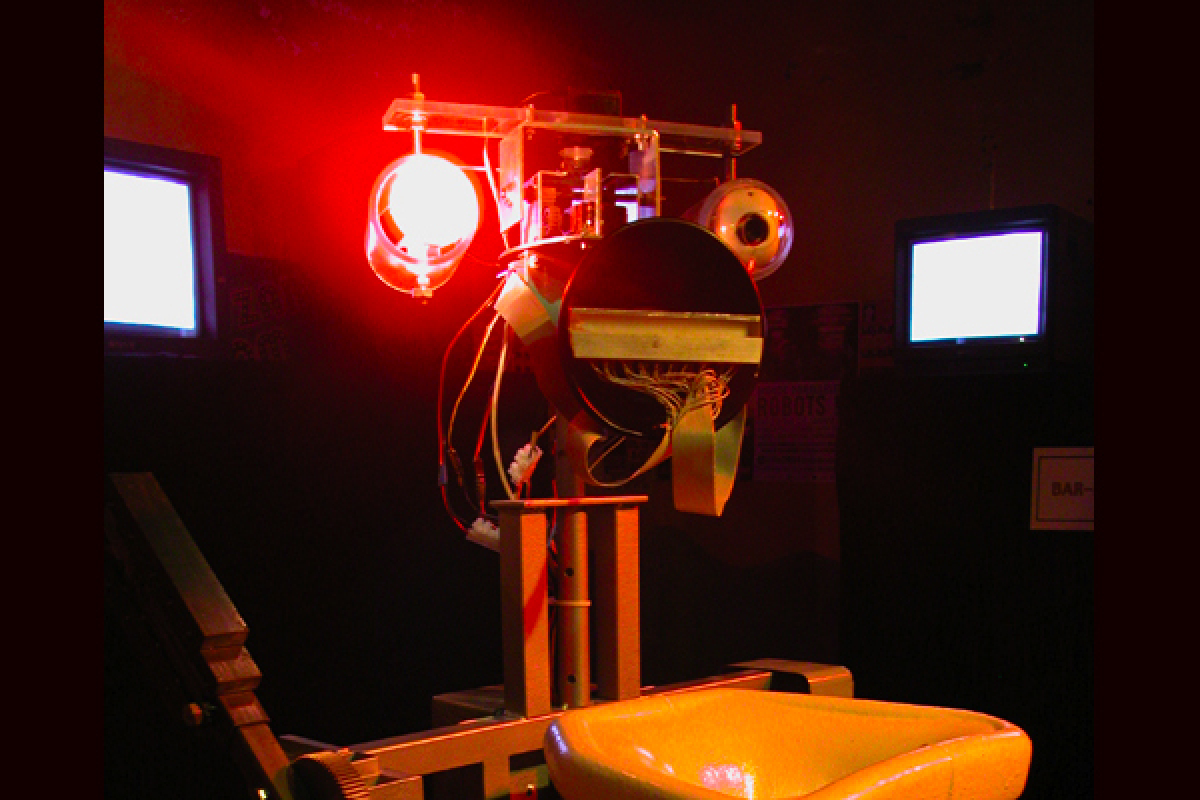 THE BAR BOT
Helena: No, you don't understand me. What we really want is to - to liberate the Robots. Helman: How do you propose to do that? Helena: They are to be dealt with like human beings. Helman: Aha. I suppose they're to vote? To drink beer? To order us about? (from the theatre play "R. U. R. - Rossum's Universal Robots" by Karel Capek) Robotic research spawns the most remarkable machines attempting to emulate the ideal of the human being. Hondas Asimo walks clumsily about the world, the Anthropos robot of the European Media Lab is trying to pick up contact with human beings, the MIT's Kismet is making funny faces to people looking at it. These robots show some features which are very typical for the human being: social interaction, bipedal walking, vision, intelligence (of course only in a basic form in comparison). But something is missing, something other than the lower complexity and performance of these robots' human features, something fundamental. What makes them so different from human beings? Or the other way round: what is it that makes humanity human? Science and industry build robots for the advantage of humans. Robots should be our intelligent, cheap workers and adjutants. But humanity is not profitable for any other species. In fact, isn't mankind's most striking feature the pursuit of its own advantage, its impetus the interest in itself? The Bar Bot is driven by self interest. Its aim is to drink beer. In order to achieve this goal in bars, the social beer consumption localities of human society, it also deals with money. It asks people for coins and spends them as soon as there is enough for a beer. The Bar Bot is not beneficial for humanity. Rather, it maximises the advantage for itself, like humanity. But to pursue its own, highly selfish objectives, it dependends on others: somebody has to give it coins, somebody has to hand it a beer. This is where it engages in communication, in social interaction with human beings. The Bar Bot is driven by self interest, it interacts socially with humans and is predisposed to alcohol. The Bar Bot is probably the most humanoid robot ever built. The Bar Bot was produced in spring/summer 2003 by the Humanoid Robotics Laboratory and Time's Up. The project received financial support by the Cultural Institute of Upper Austria and software support by the Fraunhofer Institute for Integrated Circuits.

Wolfgang “Fadi” Dorninger was in the building…

Just waiting for you

END_OF_DOCUMENT_TOKEN_TO_BE_REPLACED

What if: Quality of Life was a decision point.