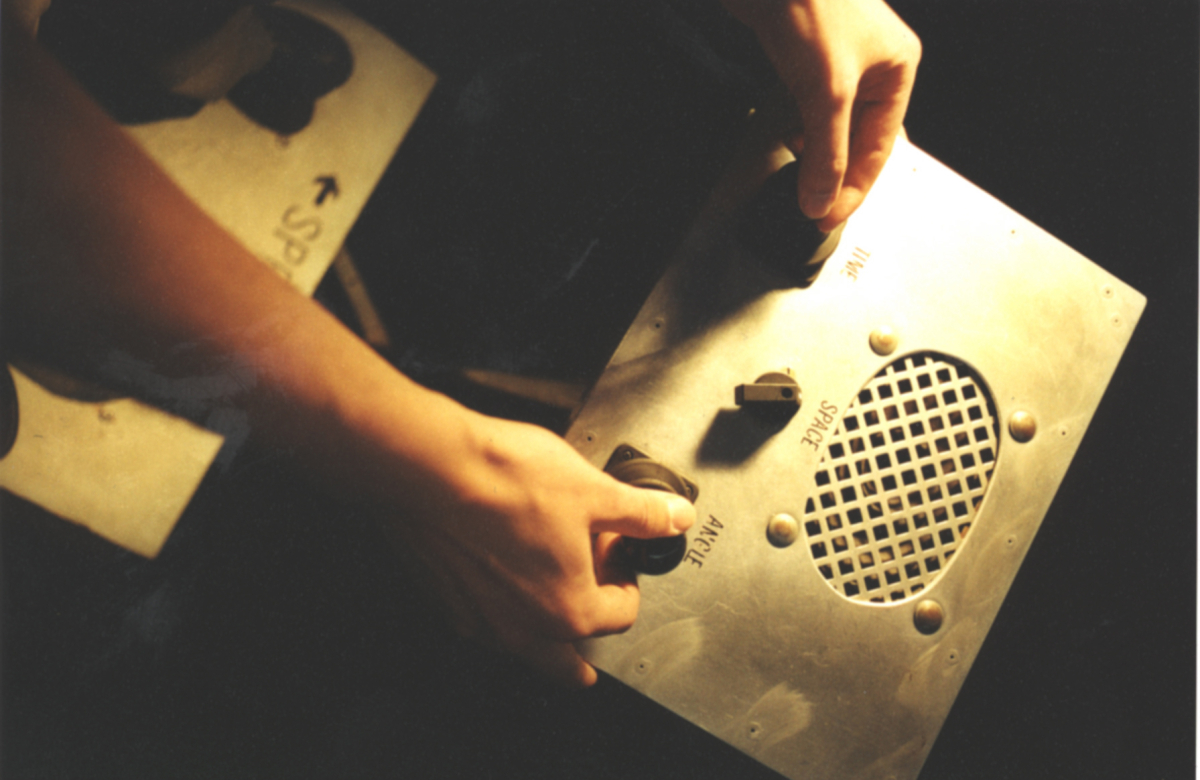 Sonic Pong - the way to fall into the machine. On the floor, the bats and balls move as smears of light immaterial, the sounds following them on the speaker array. Manipulating the game sample loops via the sci-fi control panels, the player screeks and scratches their way through an archive of 8 bit game sounds, manipulating them and batting them backwards and forwards with their opponent.
Theory
Time's Up's long-standing fascination with the array of games that started this whole thing has led them into many investigations of the prehistory of modern entertainment. The use of whole body interfaces is also a solid basis of the research that Time's Up partakes in that can be tracked through the Spherical Projection Interface, the Hyperfitness Studio or their experiments with Triclops International in CTL98. The interfaces for the control of the bats in Sonic Pong use the positioning of the body mass and its movement to control the bat's movement.

Sound
Numerous studies indicate that sound adds much more to the sense of place in an environment, whether that environment is virtual or real. The movement of the ball in Sonic Pong is tracked by a speaker array that surround the speaker field, increasing immersion in the experience.

The samples sweeping along following the ball position are taken from old(er) computer games. But the sci-fi control panel placed before the players is a control panel for the manipulation of these samples. Manipulating the sample loop in time (pitch and length), space (effect selection) and angle (effect parameters) allows the relocation of the sound to a hyperscientific fifties dimension.

Cheat Sheet
The Cheat Sheet allows the user to get around the Mario Brothers obstacles and get to the core of the game more quickly.

- Do not be deceived. Sonic Pong may appear to be a game of electronic tennis, but it is not.
- Use your center of gravity to move the balance to move the paddles - keep your shoulders as motionless as possible.
- TIME is essential - in all spaces, the TIME control determines the size of your sound in time.
- Select your SPACE of sound modifications - only then can your ANGLE manipulations effect the sound.
- Do not be distracted - falling into the domain of sound, you may drop the ball.